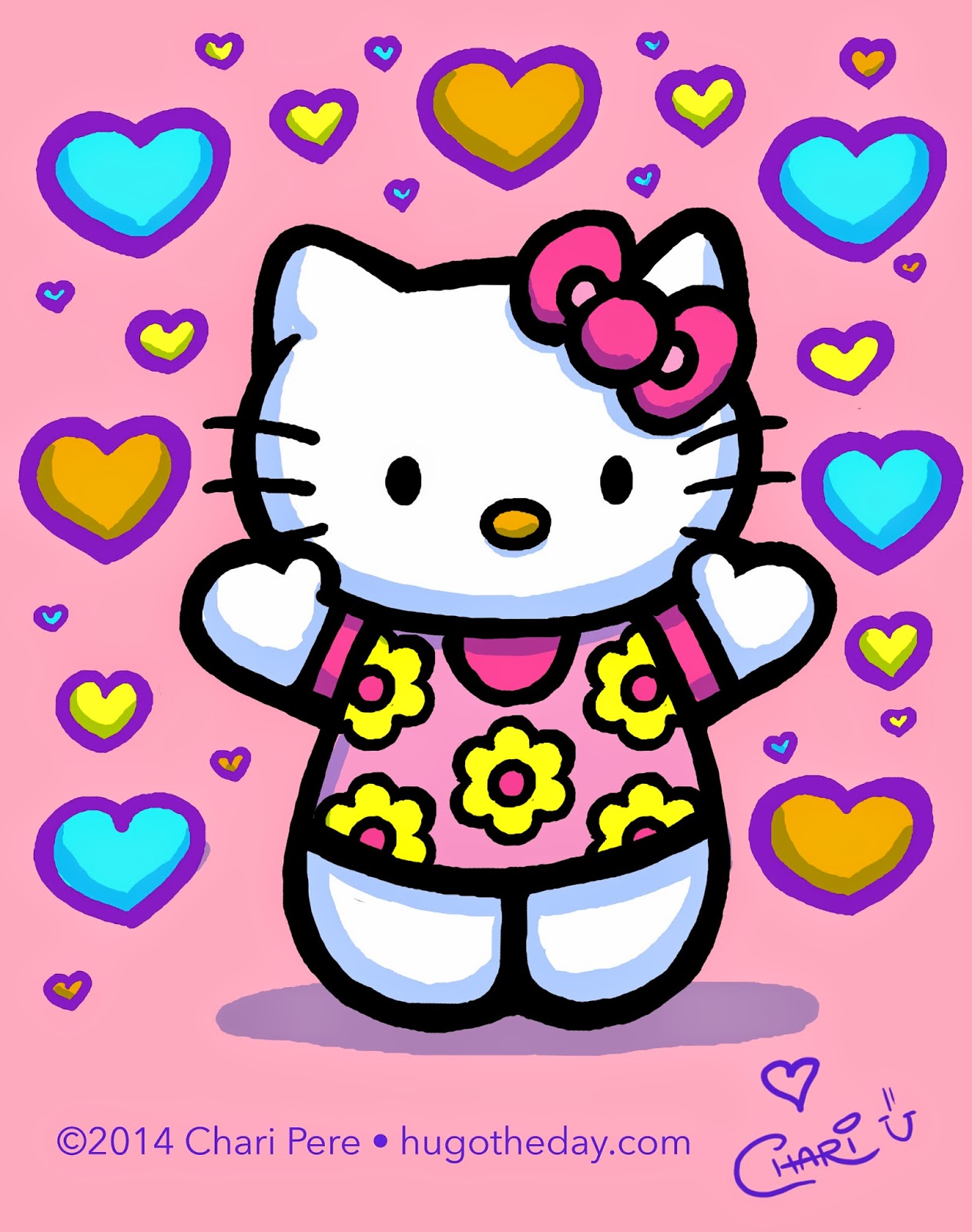 The news that Hello Kitty is not a cat sent the internet world ablaze yesterday. Confused? Join the club! Here's a Hello Kitty hug for you to make it all better. Although she's not a cat. And this is not a hug. It's an embrace with two arms, but definitely not a hug. This request was for Sara Shoff from CA on behalf of her daughters.
Posted by Chari =0) at 7:00 AM No comments:

Email ThisBlogThis!Share to TwitterShare to FacebookShare to Pinterest
Labels: cat, Hello Kitty, hug, not a cat 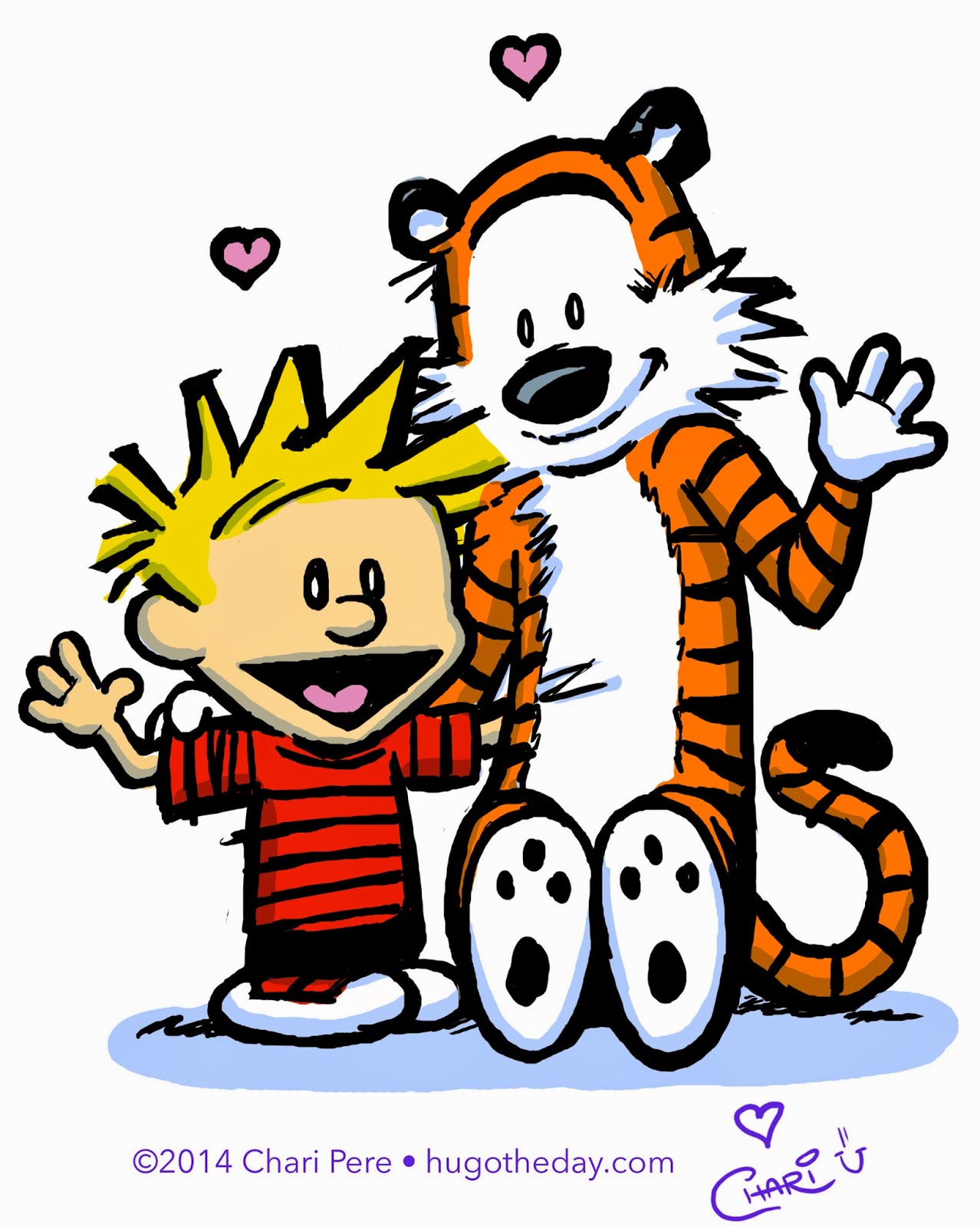 When I read my first Calvin & Hobbes strip at the age of 11, I knew I wanted to be a cartoonist. When searching for a spouse, I always dreamed of finding someone who would be willing to dress up as Calvin & Hobbes for a costume party. When Target had a stuffed tiger doll that looked almost just like Hobbes, my husband and I ran out to buy one for our son (who is currently sleeping with it in his crib as I type). For my husband's 29th birthday, I bought him the "Comic Bible" - the three book hardcover collection of the entire Calvin & Hobbes comic strip (which he still reads every night in bed before/while falling asleep). In fact, we are such fans that we both happen to be featured in a wonderful documentary about the strip called Dear Mr. Watterson (available on DVD, Blu-Ray, Netflix, Amazon, and other locations).

I'm surprised it took me this long to do a Calvin & Hobbes hug, but thanks to a special request by Reena Ribalt-Papir from NY, the Calvin & Hobbes Hug O' The Day makes its grand appearance.

P.S. Here is the picture of my husband and me dressed up as Calvin & Hobbes for our first costume holiday party together. For the record, we won the costume contest that day. Dreams really do come true. =0) 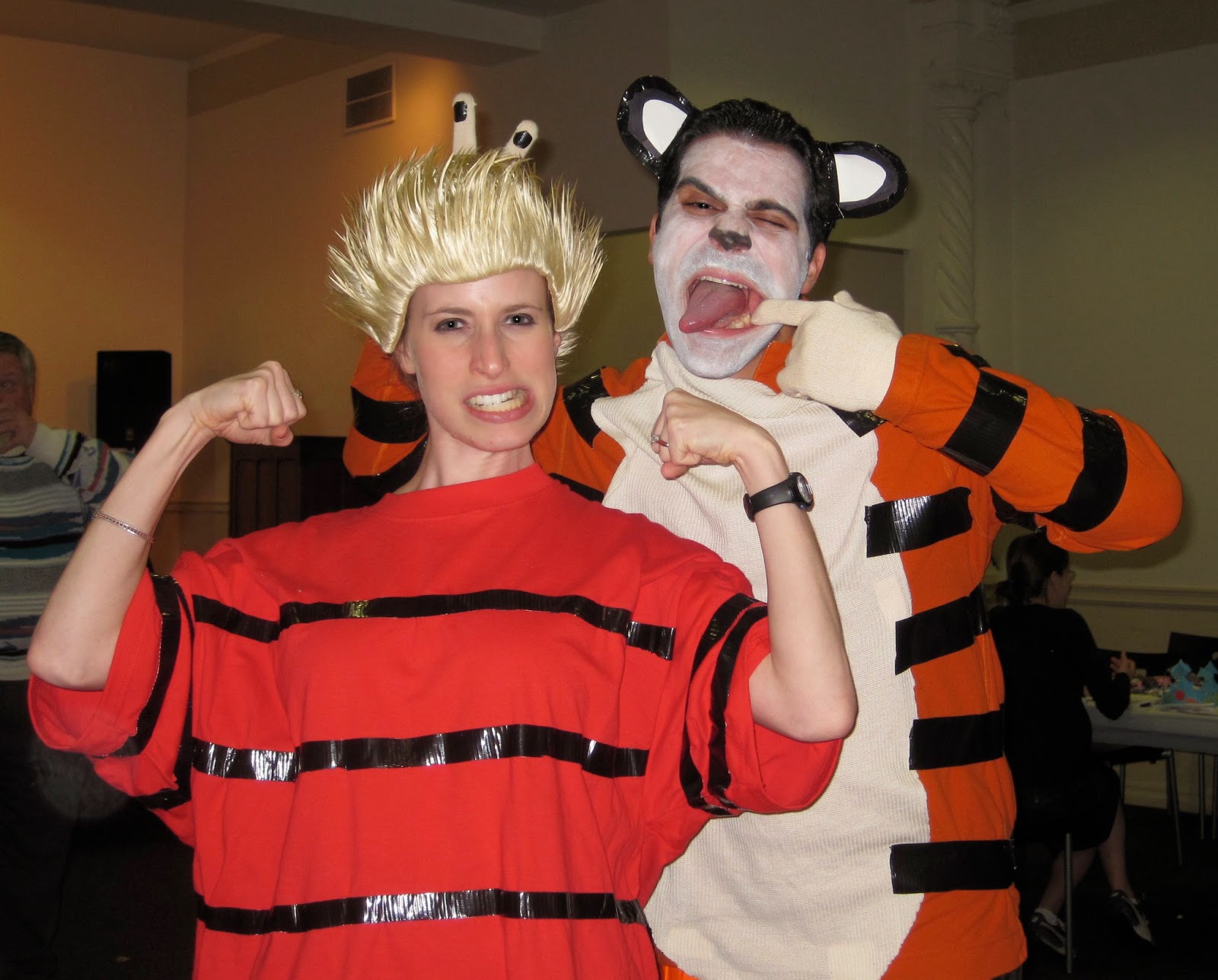 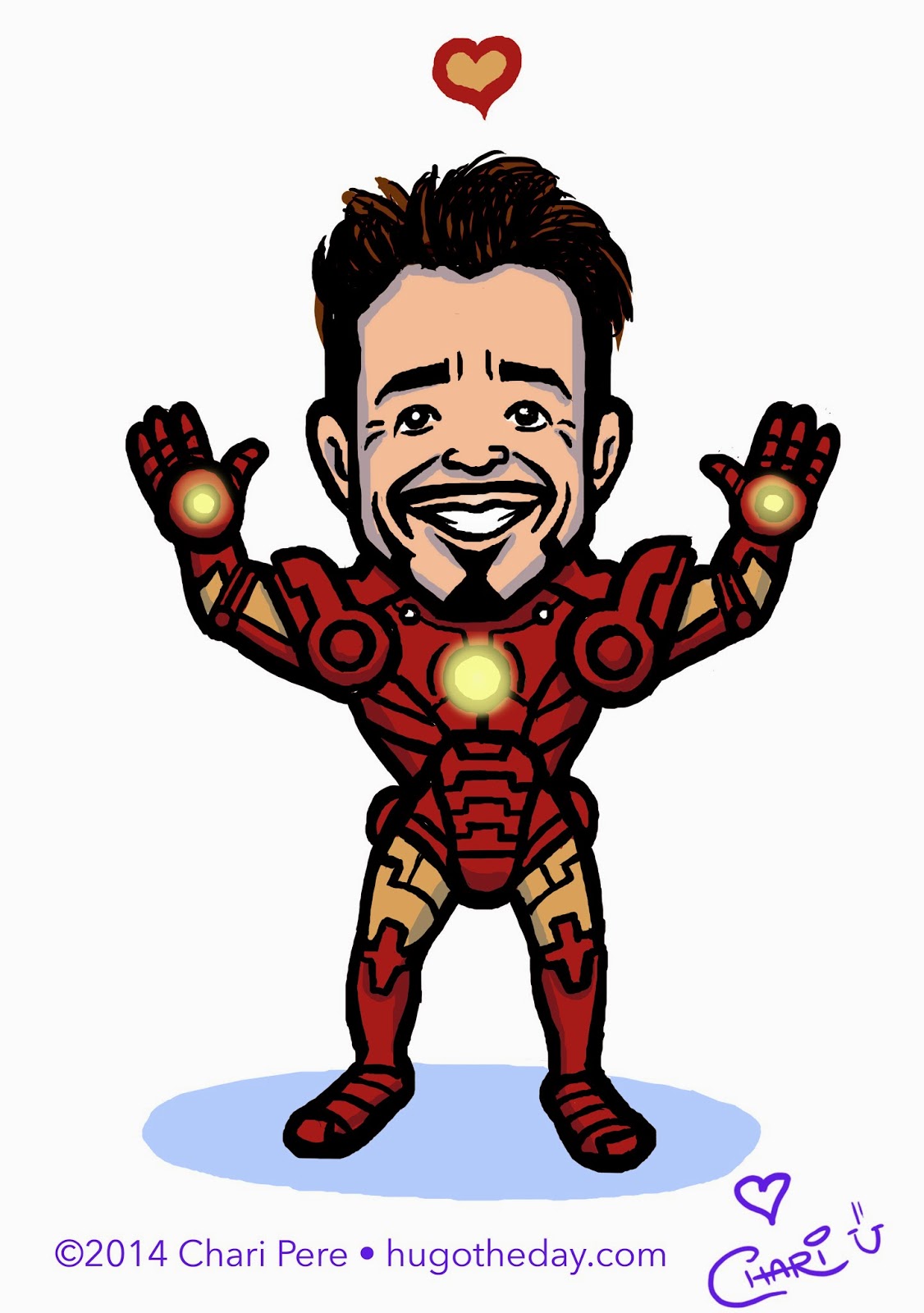 I had a request for an Iron Man with Tony Stark's face exposed. So here you go, Ari Hoffman from Seattle!
Posted by Chari =0) at 7:00 AM No comments: 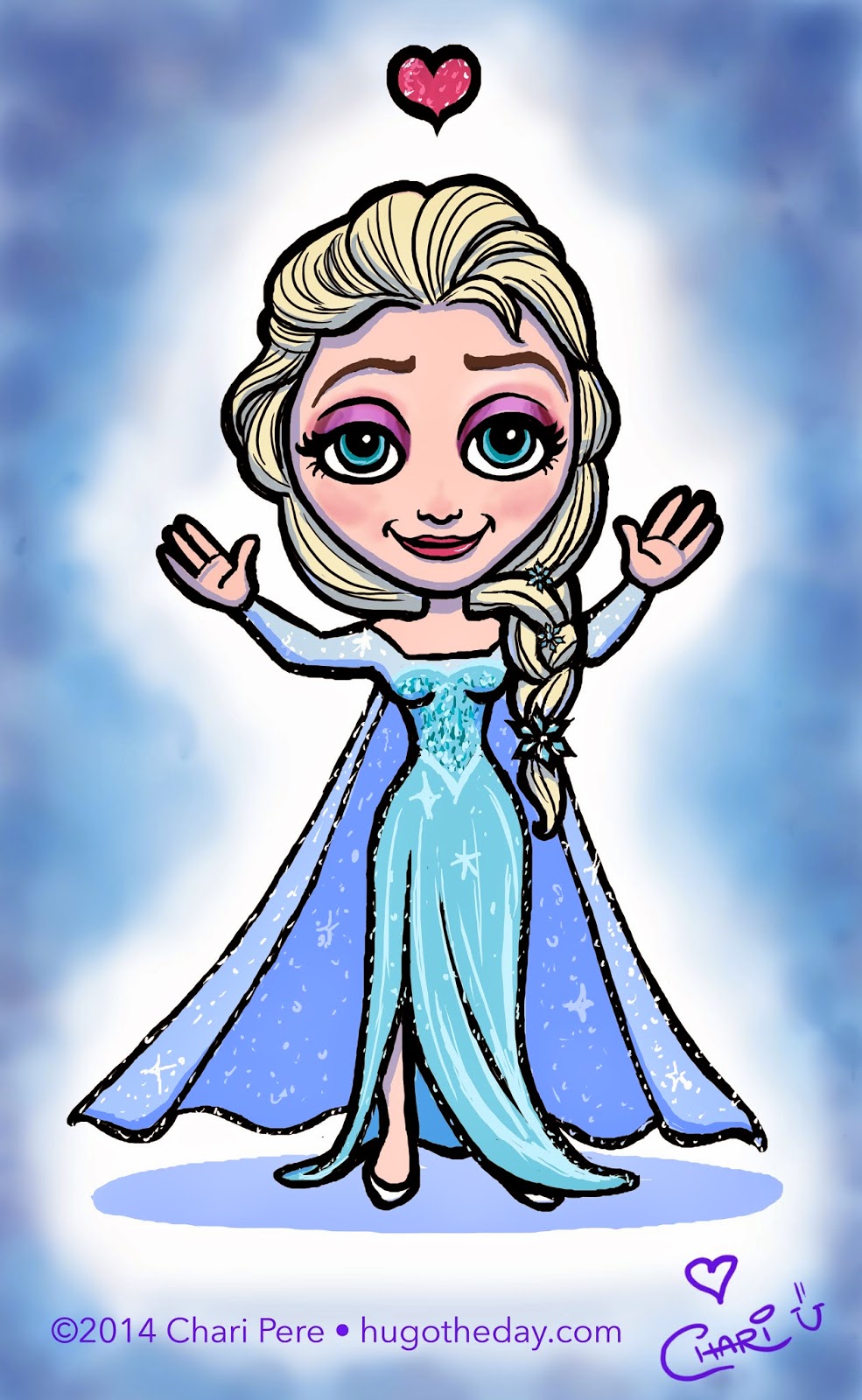 It was only a matter of time before Frozen made its way into the blog. If you're feeling the hug, just let it go and share the love! This is for Ariella Newberger from NY in honor of her niece's upcoming birthday. Now, a question arises...Do you want to hug a snowman?
Posted by Chari =0) at 7:00 AM No comments: 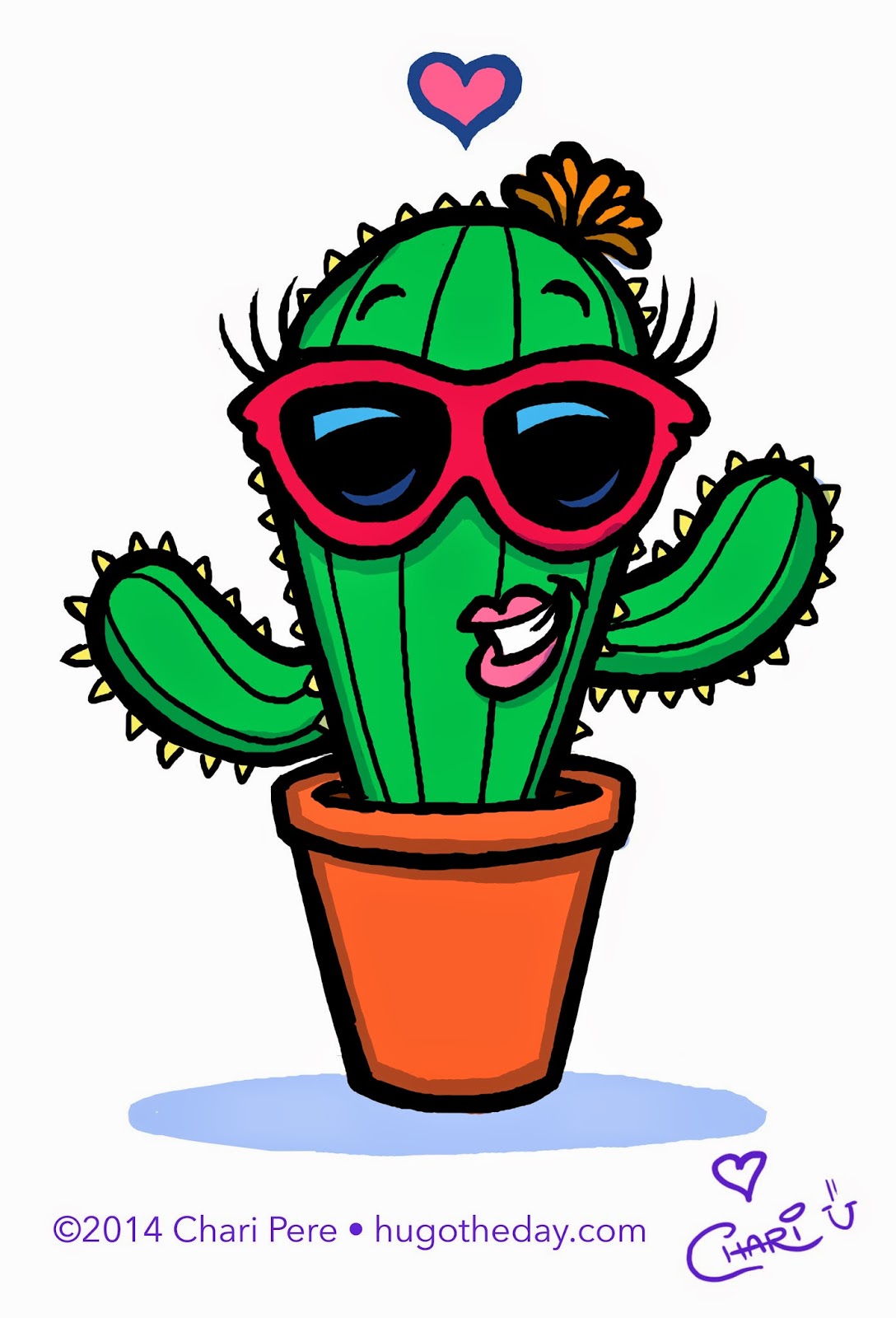 I first fell in love with cacti during a family vacation to Arizona in 2007. I probably drew my first cactus hugging around then - because all I wanted to do was give a cactus a hug and couldn't in real life. This hug was requested by Jack Pittman from NC. I decided to name her Cathy. So here is today's hug from Cathy the Cactus! 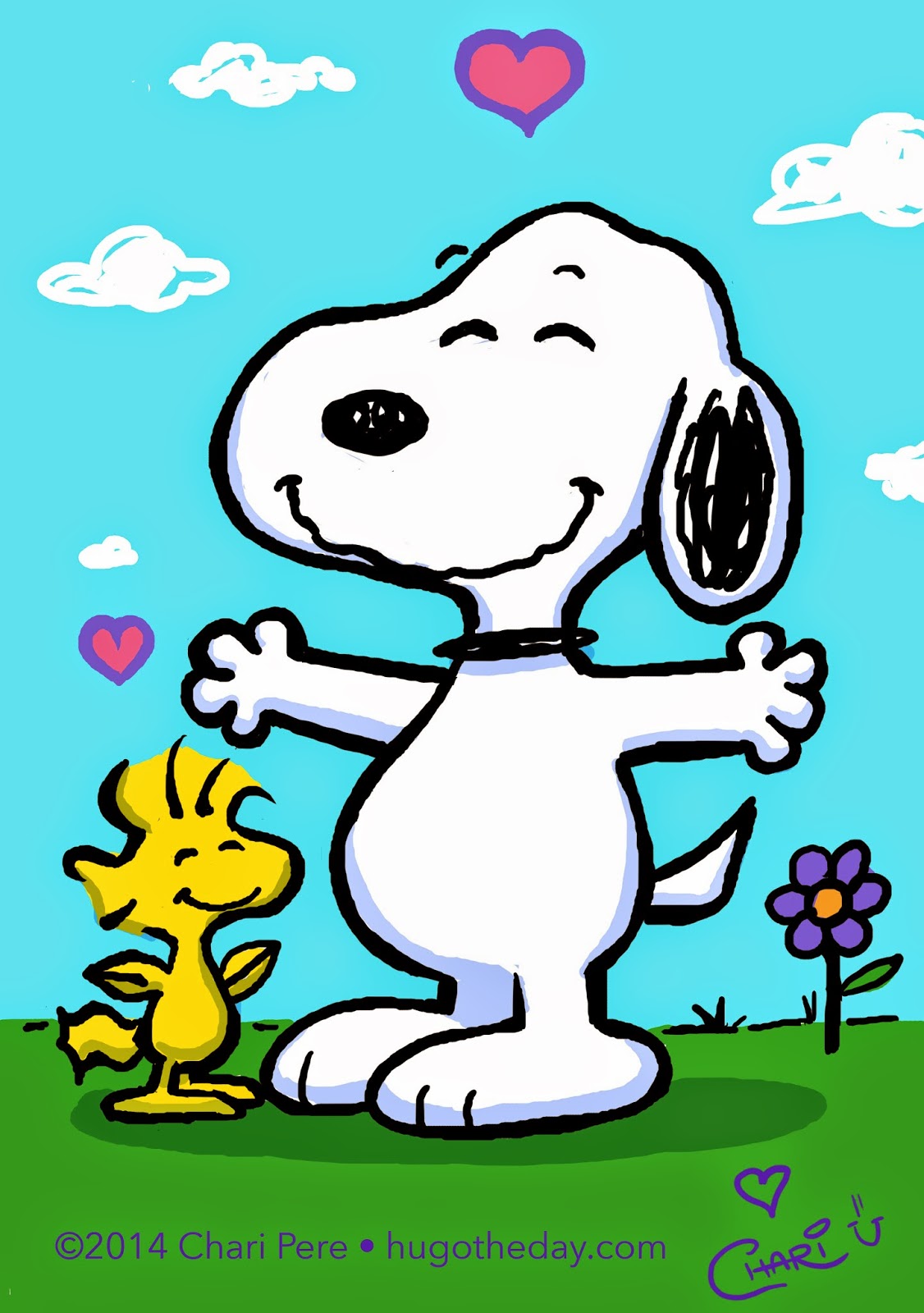 Today's hug is by request of Julie Weinrach from NY. Here's everyone's favorite beagle, Snoopy, with a bonus hug from Woodstock! Because of course, Happiness is...a warm hug!
Posted by Chari =0) at 7:00 AM 1 comment:

Lions and Tigers and Hugging, Oh My! 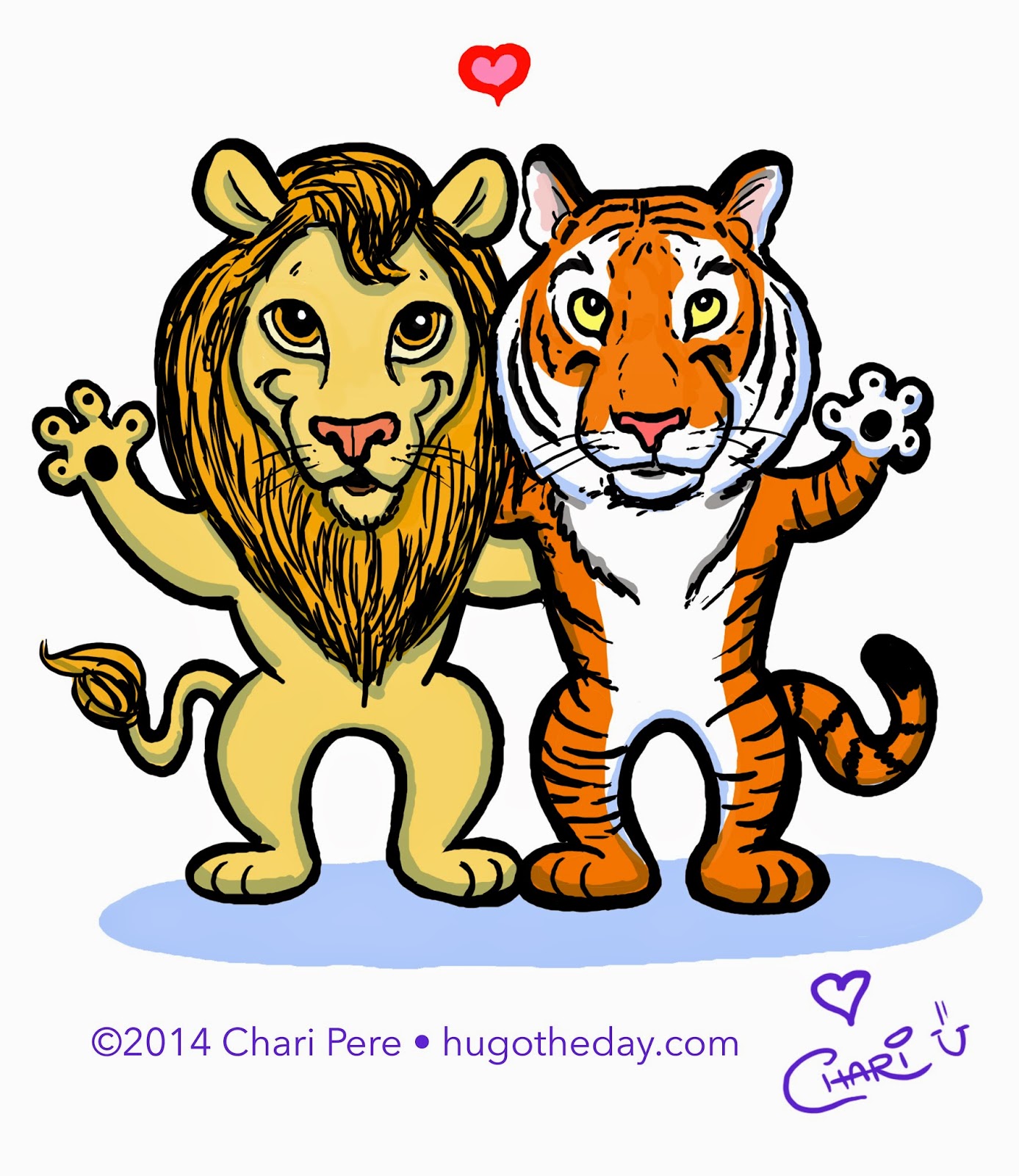 Today's hug request for big cats like a lion and a tiger comes from Yaron Karl of NJ. And now, since I don't have a pet, I need to find a big ol' stuffed animal to give a real, fluffy hug to. If you do have an actual pet, big or little, go ahead and give him/her a nice big hug (and an extra one for me)! Happy big cat hug day!
Posted by Chari =0) at 7:00 AM No comments: 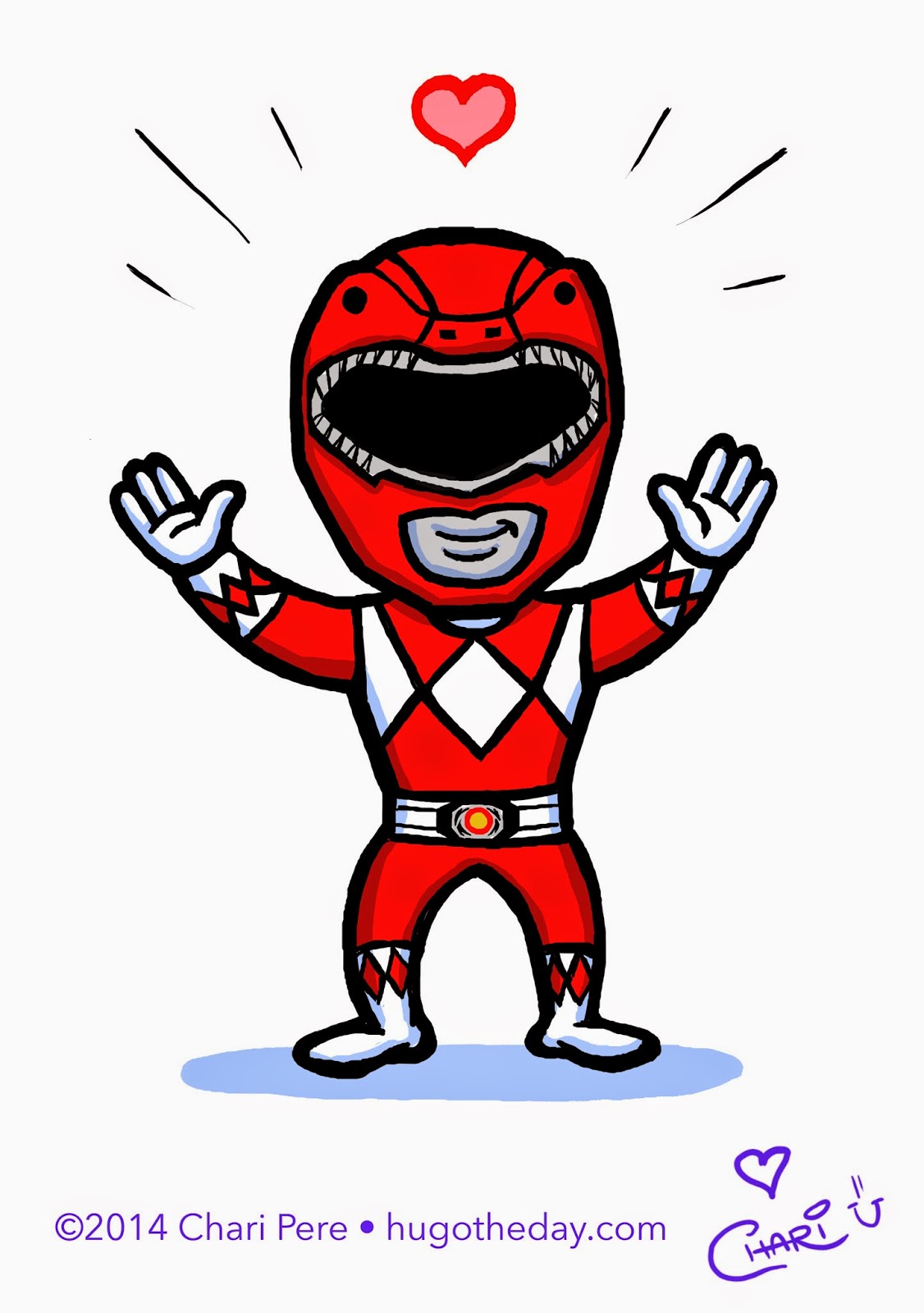 "It's Morphin Time!" was a catchphrase of my childhood. I remember going to a Jo-Ann Fabrics store (or some arts & craft store of a similar nature) one time to meet "The Red Power Ranger", just to be disappointed that it was some guy dressed up as the Red Ranger and not the real deal. So when a good friend, Matt Jayson, posted a short film he did of a Power Rangers persuasion, the fan girl in me did some happy little jumps for joy. So today's hug is for Matt, whose video "The Ranger" has now had over 30,000 views. Check it out for yourself here: http://www.funnyordie.com/videos/edc6f69a79/the-ranger 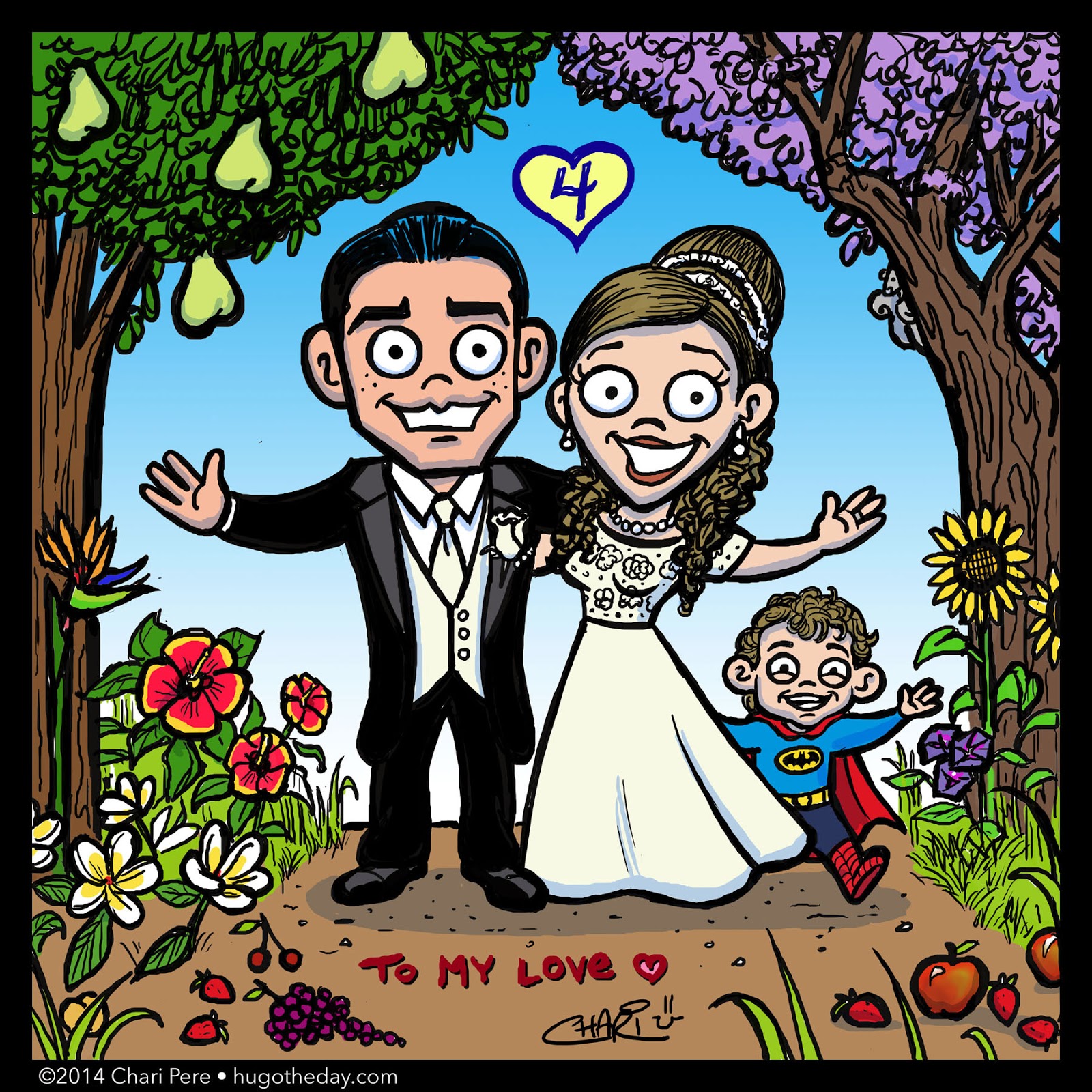 Today's hug is an anniversary gift to my wonderful, amazing, incredible husband of four years. Fruits and flowers are the traditional gifts of a fourth anniversary, so all the fruits and floral decorations in the hug have a special meaning to us. Making a guest appearance is our amazing 22-month old son, who is featured in a special Super-Bat-Spider-Man costume. Happy anniversary, my love! Excited to see what the next year brings for us. <3
Posted by Chari =0) at 7:00 AM No comments: 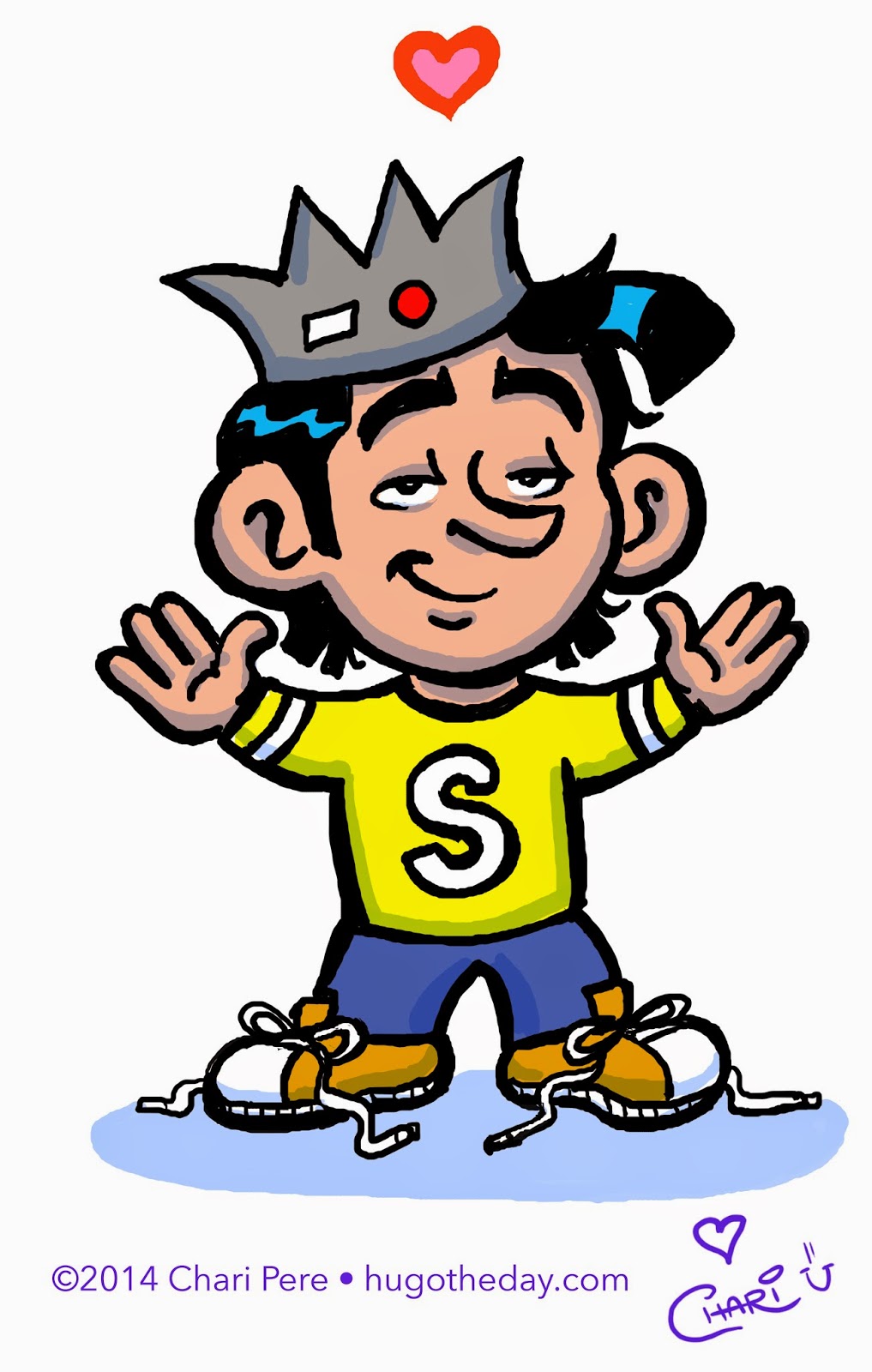 Yesterday, I found out that a dear mentor and friend, cartoonist Stan Goldberg, had suffered a stroke late last week. Stan, who had drawn for Archie comics for decades, and his wife Pauline had been in a terrible car crash last October, but both were doing wonderfully when I saw them this past May and June.  Stan is one of the kindest, nicest, most generous people that I know, and we are all praying for his recovery.

Stan has been drawing Jughead more frequently for sketch requests, including for my son back in May during the National Cartoonist Society's annual Reuben Awards. So, I drew this hug for him. Please get well soon, Stan, so we can all give you big hugs in person. Our hearts go out to you and your incredible family.

UPDATE 9/1/14: Sadly, Stan passed away last night. He will be missed more than words can say. We love you, Stan, and miss you terribly already.
Posted by Chari =0) at 7:00 AM No comments: 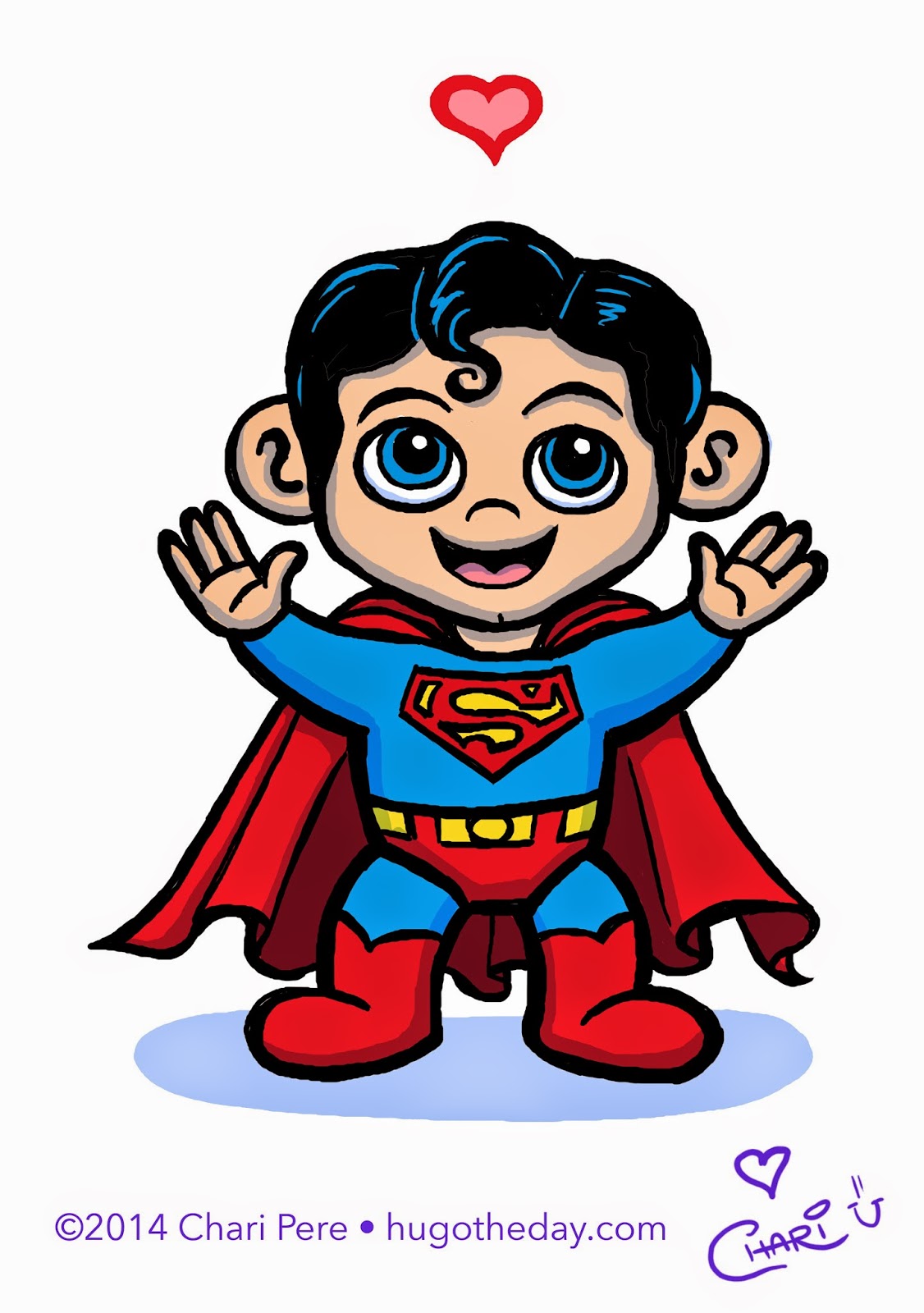 Time for a Super-hug! I did this drawing loosely based on my favorite Superman, Christopher Reeves. I'd already done Batman and Spider-Man, so I definitely needed Superman to complete my superhero hug trifecta. This request came from Libba Peromsik from CA - thanks for the request, Libba! 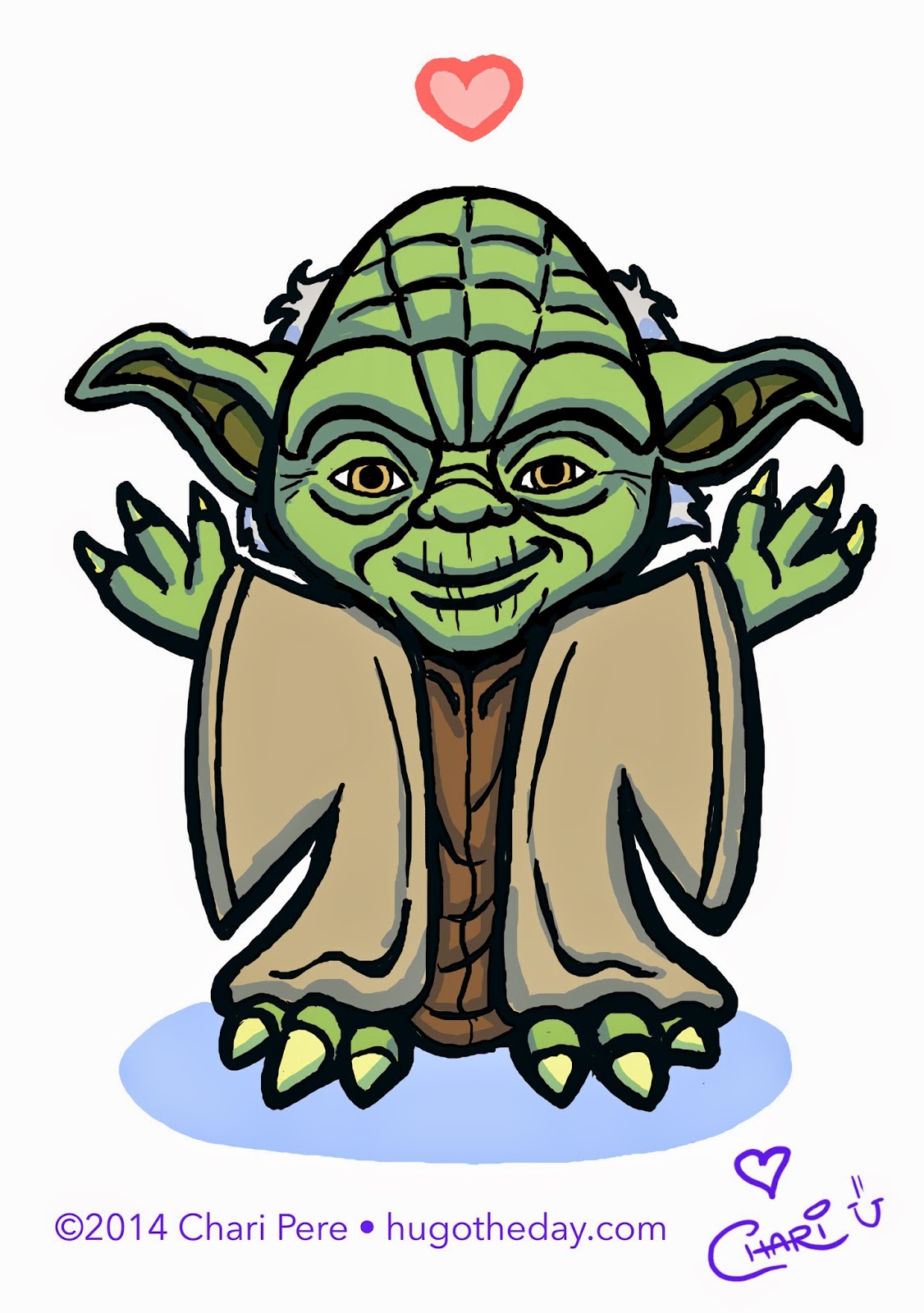 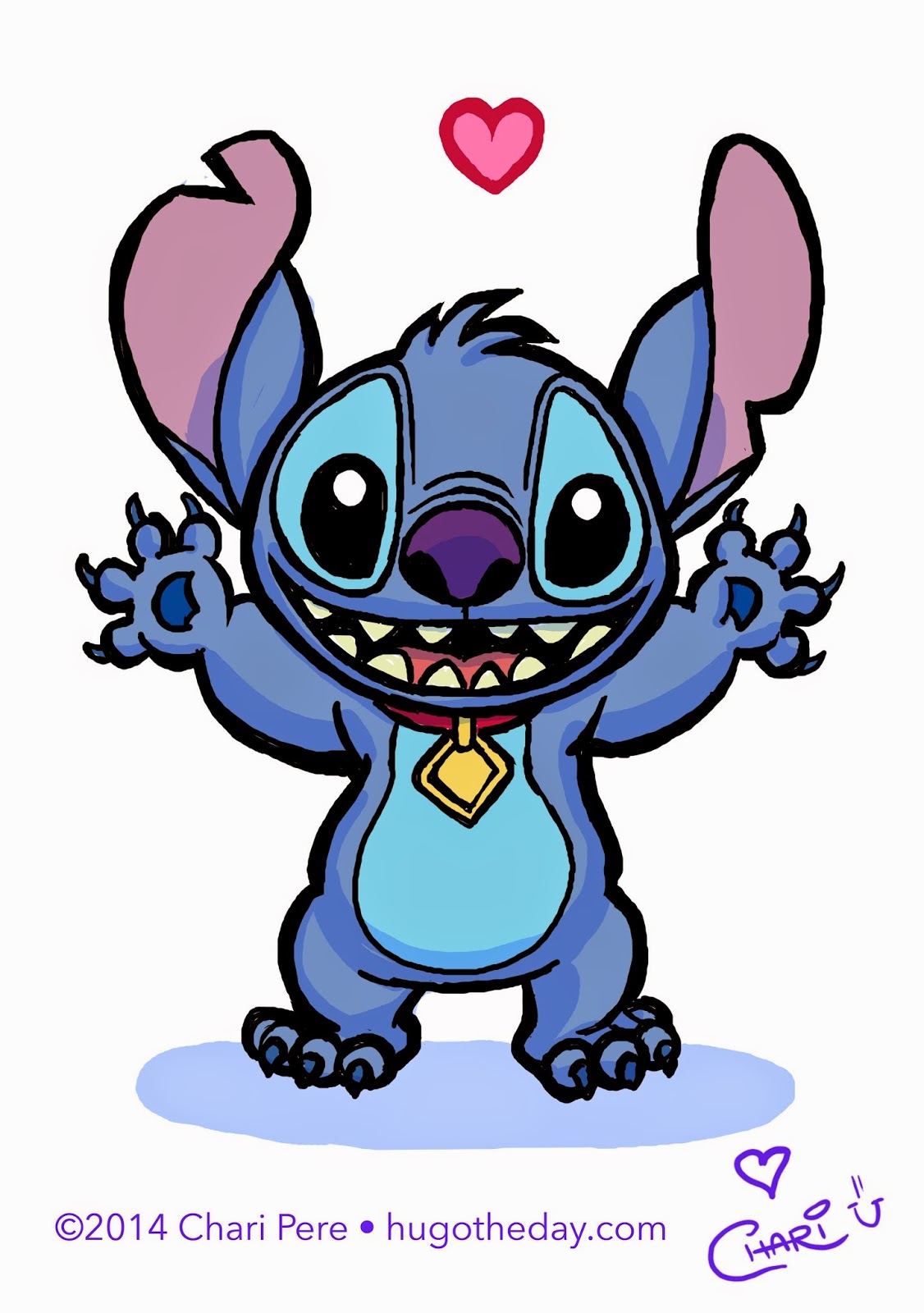 I was so happy to receive this request for a Stitch hug. Stitch is my *favorite* Disney character ever. You would not believe how hard it was to find an open-mouth Stitch stuffed animal when the movie came out. Seriously! To me, Stitch's personality all comes through his mouth. Having a closed-mouth stuffed animal of Stitch was sure, a cheap way to save money on mouth details, but was not the real, hyperactive character that I love. So I hope you enjoy today's "Blue Punch Huggy!", as per request by Michelle Stulberger from NY.
Posted by Chari =0) at 12:11 PM No comments: 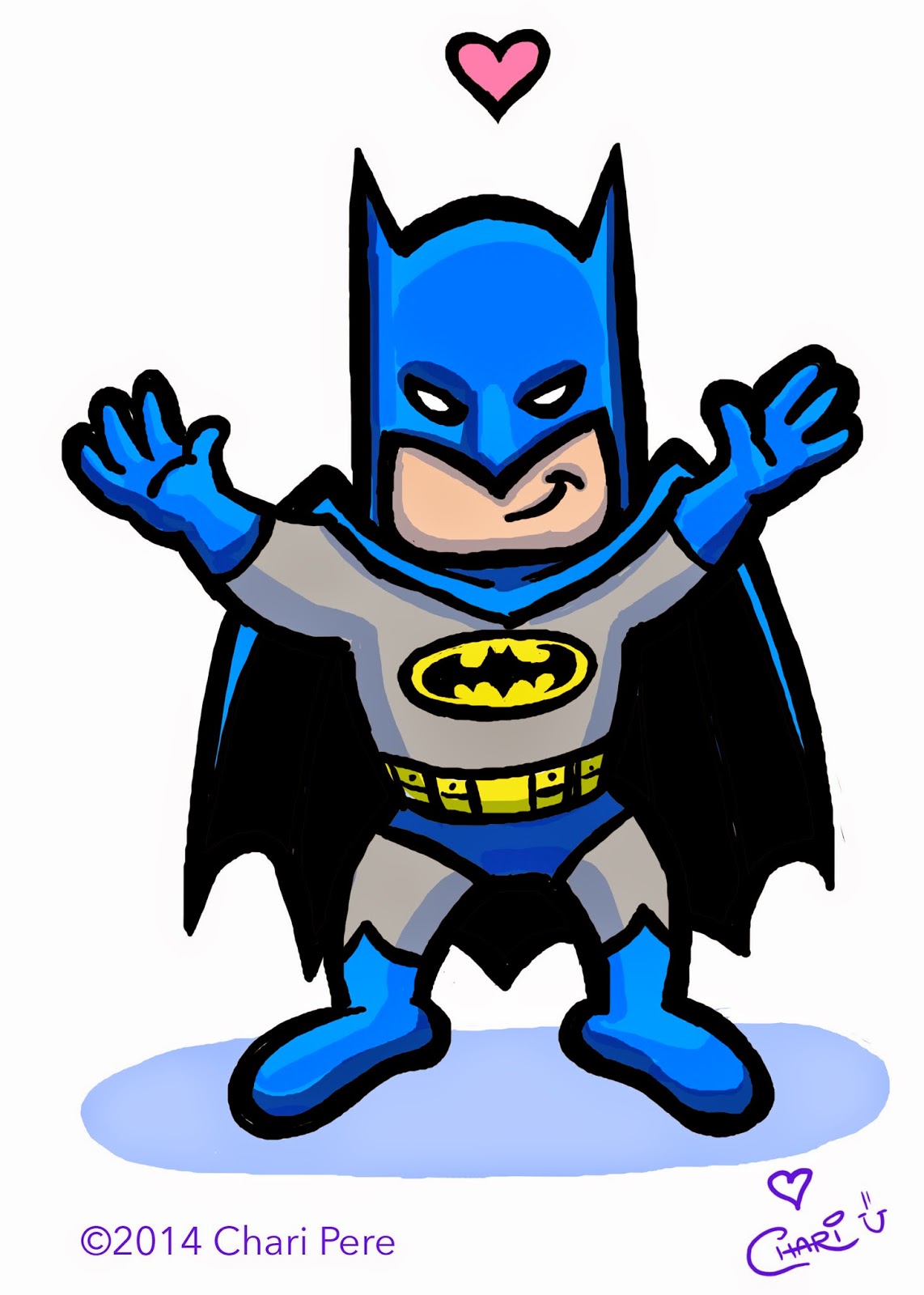 To Robin, With Love. 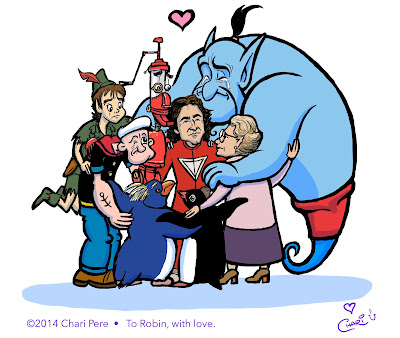 I switched around my post today for an extra big group hug. Here is an ode to some of my favorite Robin Williams characters. Still can't believe he's gone. He's already missed terribly. Nanu nanu. <3
Posted by Chari =0) at 4:00 PM No comments: 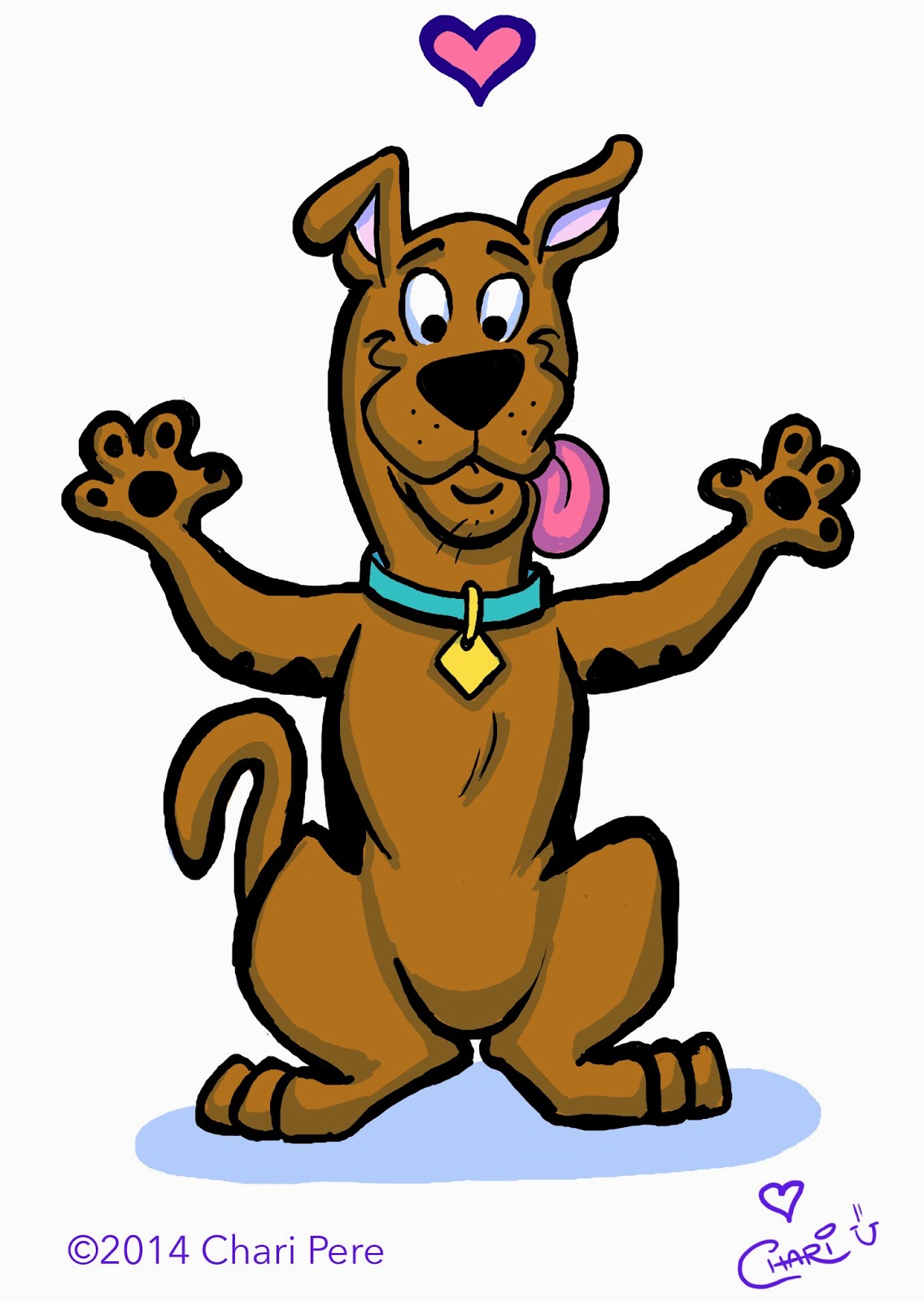 I totally feel like I could use some extra hugs today. Here's a Scooby hug, for the biggest Scooby fan I know, my friend Tamara! Super fun for me to draw too, because Scooby was my favorite pup growing up.
Posted by Chari =0) at 12:00 AM No comments:

Teenage Mutant Ninja Turtle Hero Hugs in a Half Shell! 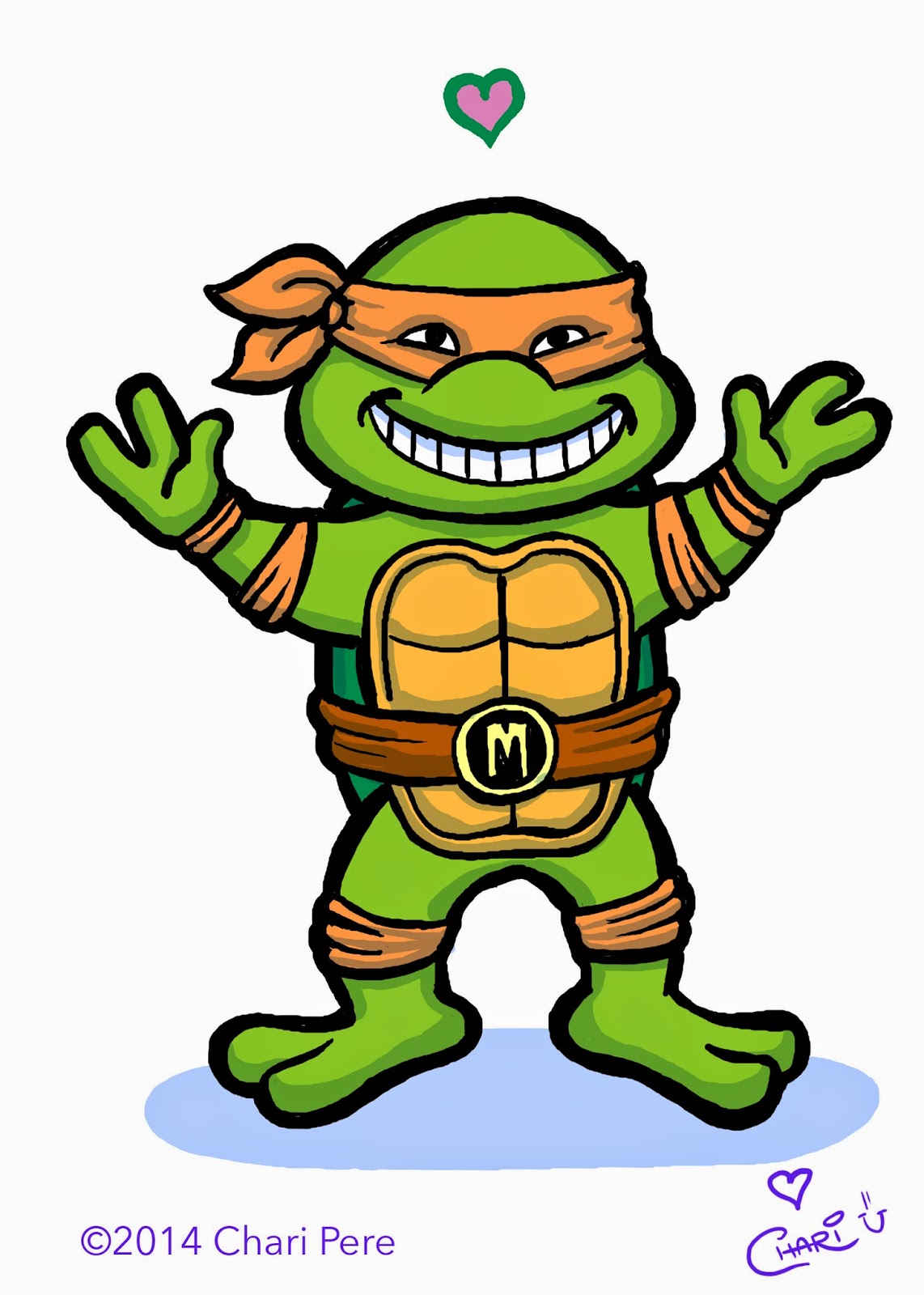 In honor of the TMNT movie, I drew an older-school hug of my favorite turtle, Michelangelo. Is it just me, or is anyone else completely terrified of the latest character re-design? Methinks I will skip this current film... but watch reruns of the awesome old TV show. =0) However you feel, Teenage Mutant Ninja Turtle hugs to all!
Posted by Chari =0) at 12:00 AM No comments: 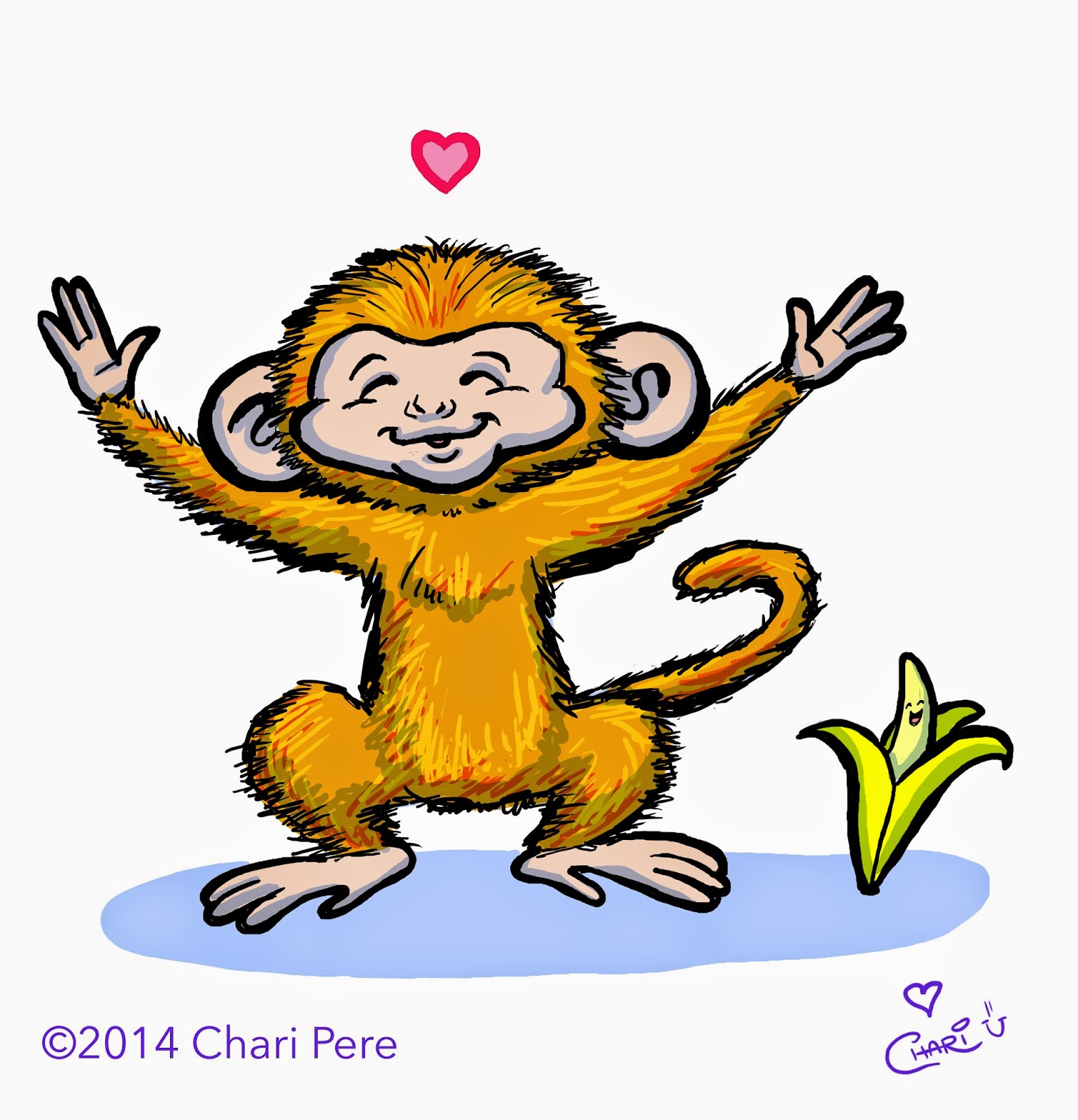 Here's a mini monkey and baby banana hug! For Sarah Abraham and Aura. =0) Hugs to all today!

*This is my first drawing drawing entirely done on my new Cintiq tablet! It's a ton of fun and a lot easier not having to worry about scanning an image. Hope to crank out new drawings even easier now!
Posted by Chari =0) at 1:01 AM No comments: 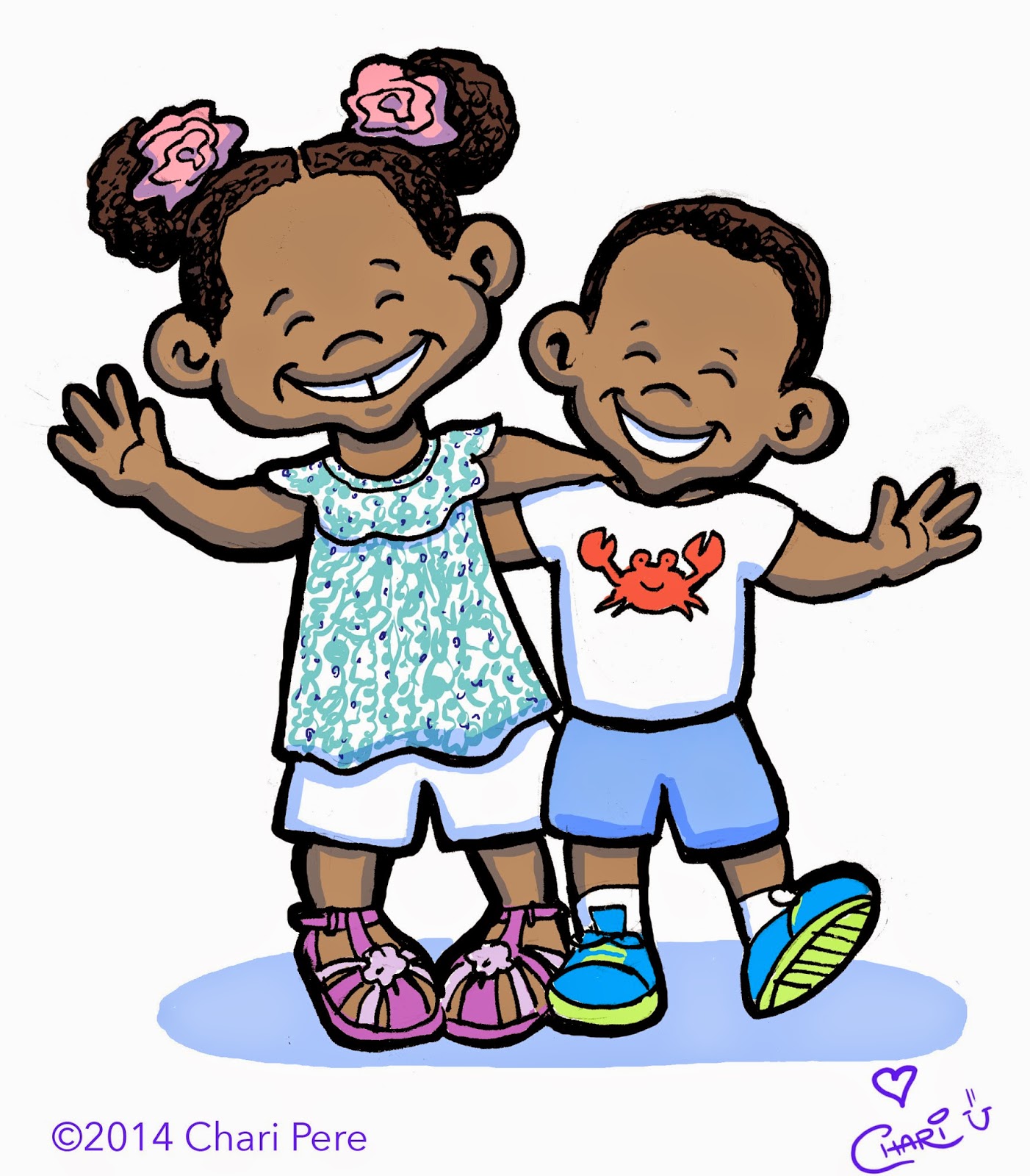 One of the people in hubby's acting group on Facebook asked for a hug pic of his kids. So, happy hugs from happy kids! =0) Over the next few days, stay 'tooned for some of the hug requests from y'all. They're so much fun to draw and make me happy! Hope they make you happy too. And if you have a request, please feel free to submit in the comments!
Posted by Chari =0) at 12:00 AM No comments: 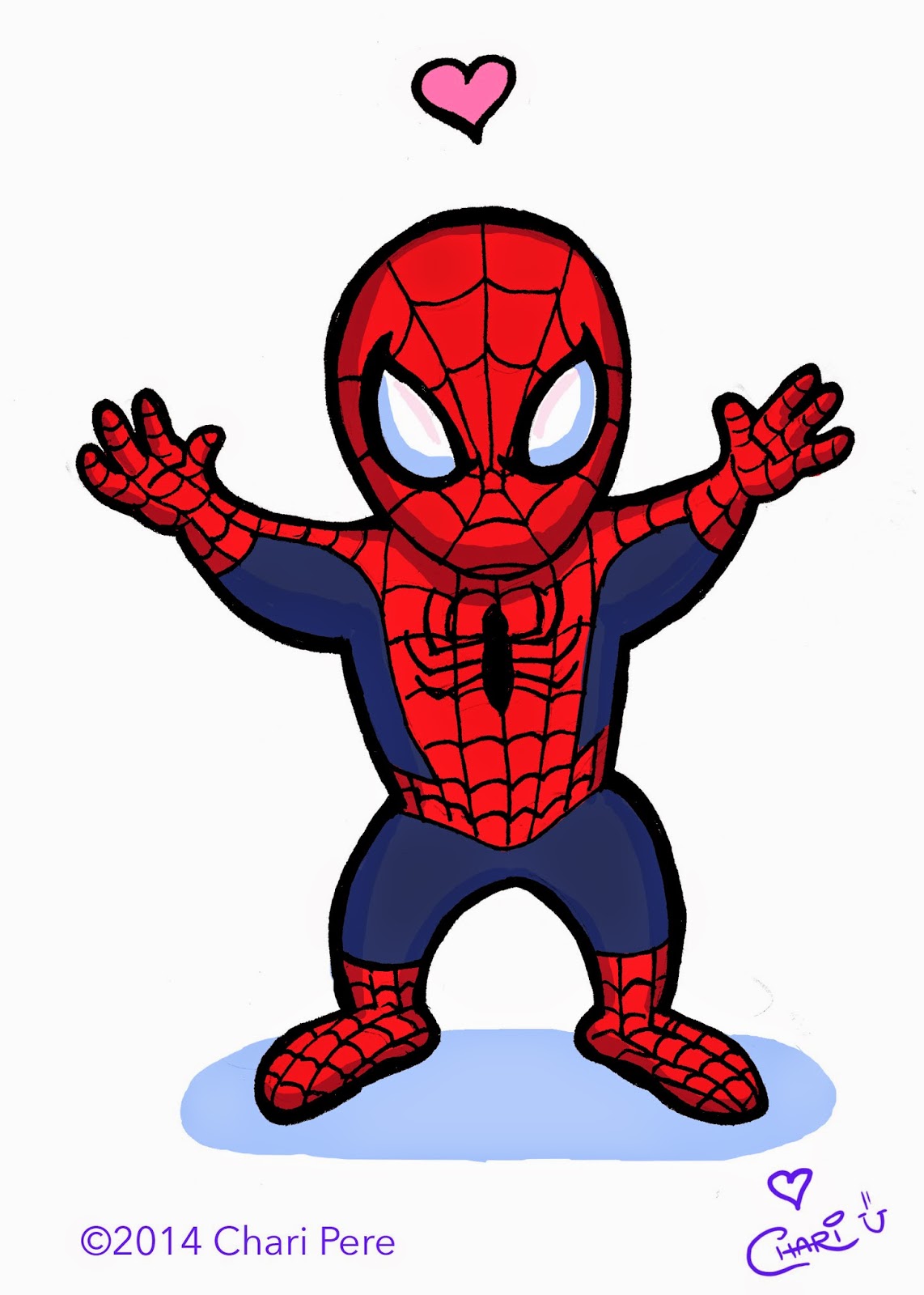 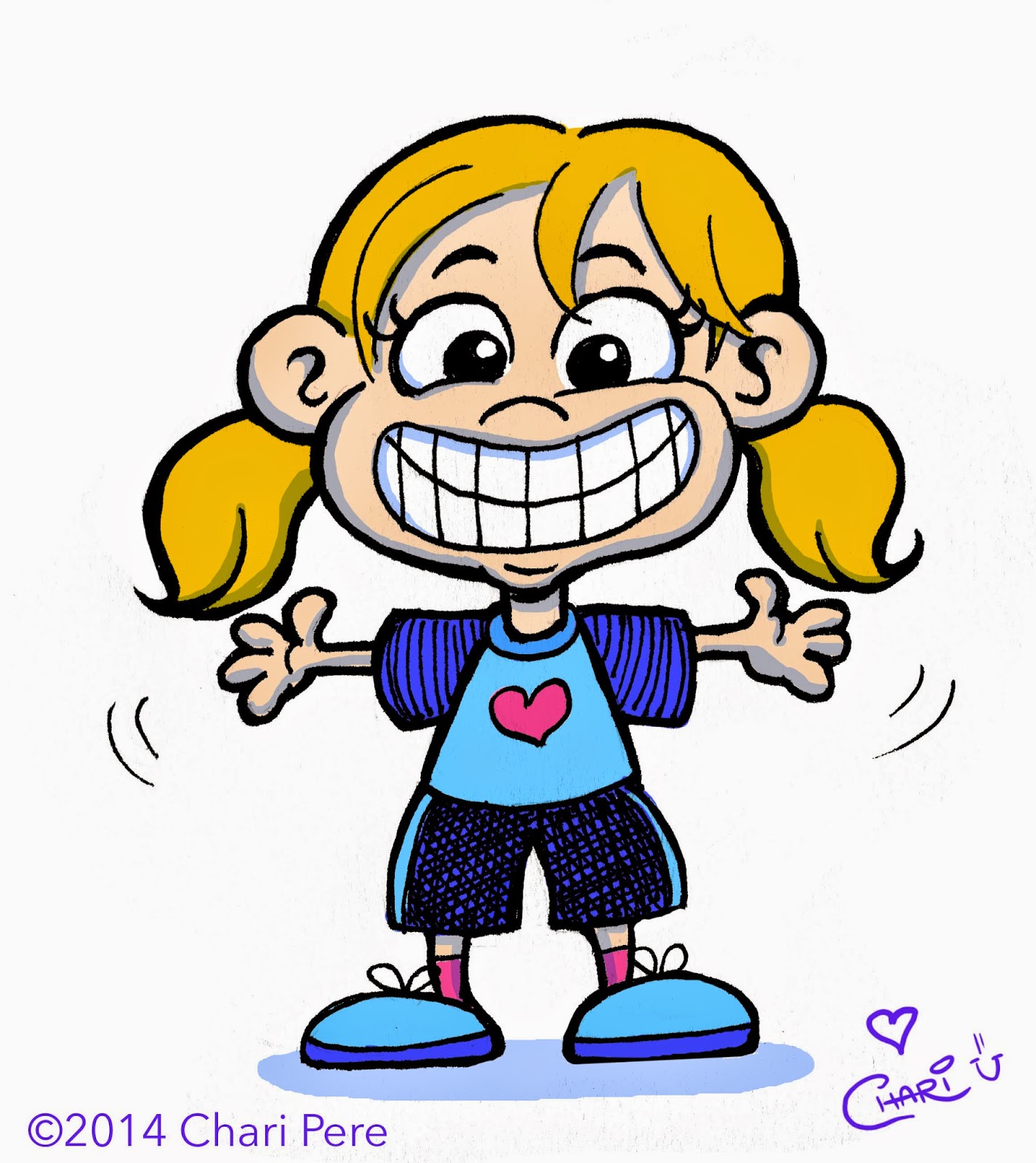 Just a doodle hug from my brain.  Maybe it's the inner me? Hugs! 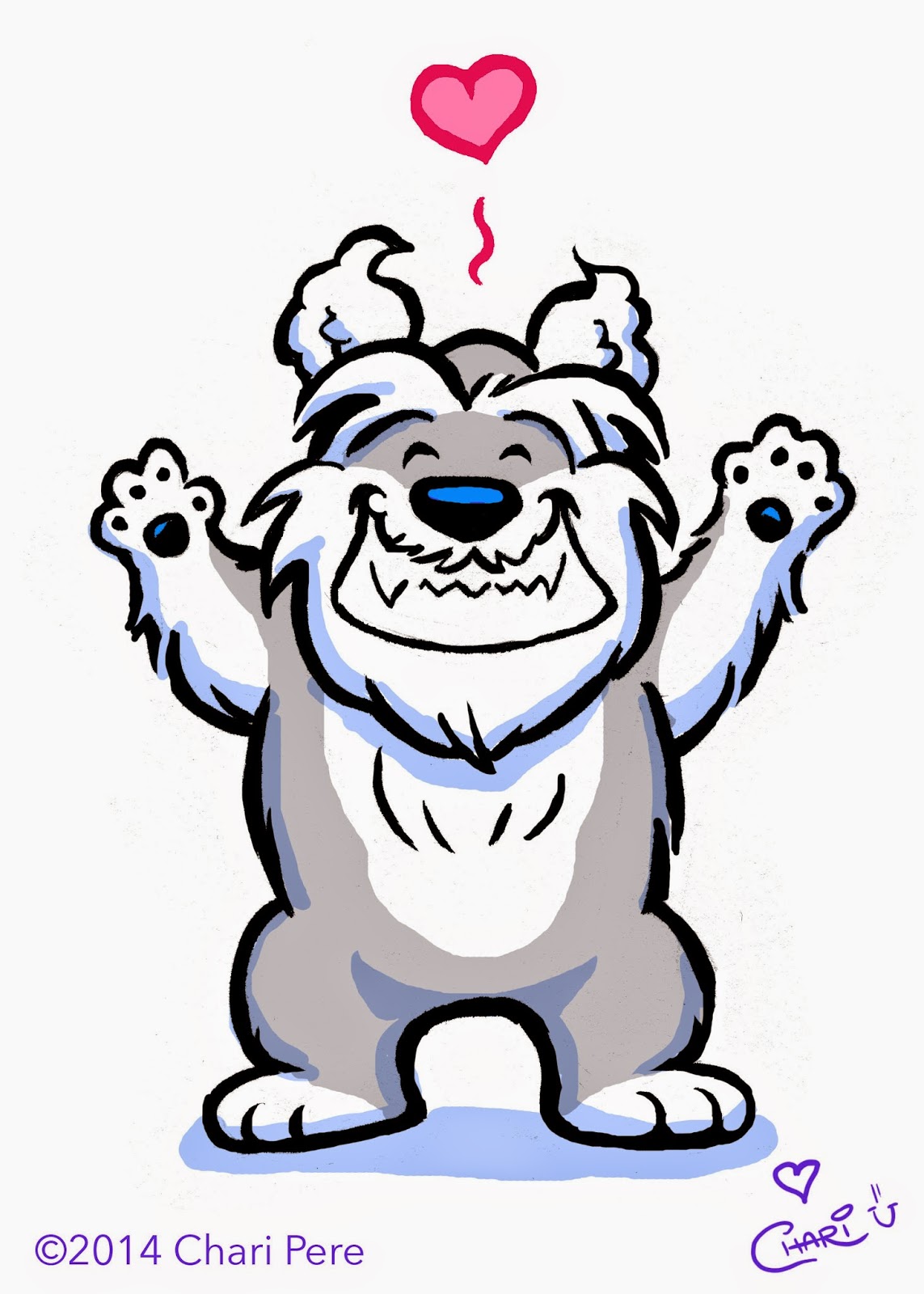 I had this idea for years to draw a hug a day.  It was sitting there in the back of my mind, along with all my other ideas for potential projects.

It got to the point recently that I just couldn't take all the depressing news on my Facebook feed. The world events had become too overwhelming. A friend of mine was feeling blue too, so I drew this for her to cheer her up. I included the two things that make me happy most: schnauzers and hugs. I think it's time to bring this project from the back of my mind to the front, and make Facebook and the internet a happier, more positive place to come to. *Hugs* to all.
Posted by Chari =0) at 12:00 AM No comments: