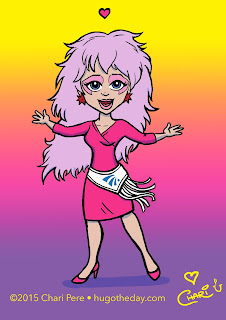 If you were an '80s girl like myself, odds are you grew up watching Jem and the Holograms! And odds are, when you heard that a Jem remake movie was in the works, you went from the high of "YAY NOSTALGIA!" to a very fast low of "NOOOOOOOO!" upon viewing the trailers. The fact that it bombed so badly at the box office is probably a surprise to...no one! So here's a revamped 2015 Jem hug for all those who can use it (especially all those involved in the making of that film).

I'm also dedicating this hug to my dear friend Ari Gold, who was the singing voice of Ba Nee in the original cartoon series. Here's an Outrageous hug for you!
Posted by Chari =0) at 7:00 AM No comments: 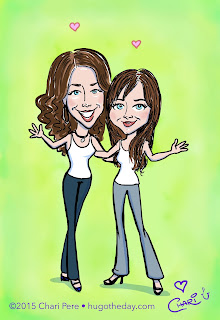 Last week was an exciting week for Pop Culture fan. I'm not just talking about that slightly highly anticipated Back to the Future Day. Those fans of the highly-acclaimed TV show Gilmore Girls were blessed with the news that a sequel for Netflix is in the works. So here is a Lorelai & Rory Gilmore hug for every fan of one of, if not THE most beloved Mother-Daughter duo in all of television!
Posted by Chari =0) at 5:00 AM No comments: 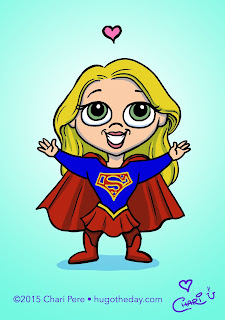 Today is the day! I drew this hug months ago in eager anticipation of the Supergirl TV show! As someone who loves both Superheroes and Rom-Coms, I couldn't be more excited for a show that combines my love for both. Who else is jazzed? Yippee!
Posted by Chari =0) at 5:00 AM No comments:

Back to the Future Hoverboard Hug! 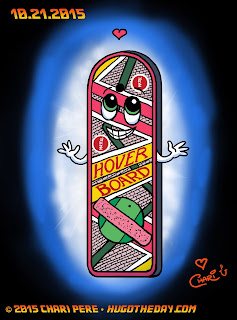 Happy Back to the Future Day! Today's celebrations are 30 years in the making. Since the lack of hoverboards seem to be the major complaint, here's a Hoverboard hug for all those celebrating today. Now excuse me as I go back to my Back to the Future movie marathon watching...(while I work of course...). Feel free to celebrate in other ways - here are some suggestions of some really cool events happening in specific cities.
Posted by Chari =0) at 7:00 AM No comments:

Email ThisBlogThis!Share to TwitterShare to FacebookShare to Pinterest
Labels: 10.21.2015, Back to the Future, day, hoverboard 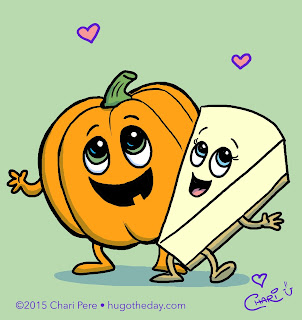 Tomorrow, October 21st, is National Pumpkin Cheesecake Day. I am posting about it today to raise awareness, because such an important day will surely be overshadowed by a one-in-a-lifetime pop culture phenomenon day that also takes place tomorrow. Unless you've been living under a rock for the last several years (aka entirely off of Facebook and other forms of social media), you know exactly what I'm talking about!
Posted by Chari =0) at 7:00 AM No comments: 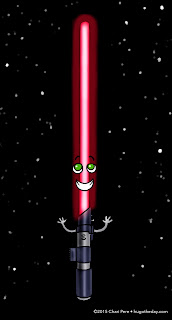 A little bit of big news about the upcoming Star Wars movie happened yesterday. No biggie. It's not like the internet freaked out or anything. Well, here's a lightsaber hug to help promote the film! Because obviously it's going to need all the publicity that it can get. ^_^
Posted by Chari =0) at 12:00 PM No comments: 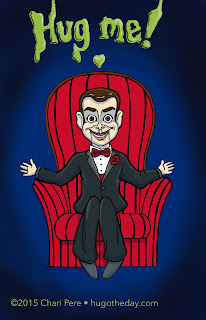 Here's a hug that will give you Goosebumps! Anyone else a fan of the book series growing up? In honor of the release of the Goosebumps movie, send this hug to anyone else who shares in the excitement!
Posted by Chari =0) at 12:00 AM No comments: 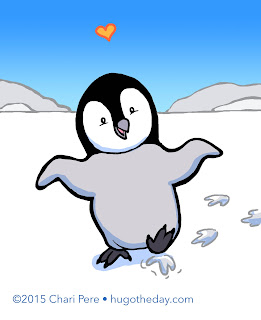 Because who doesn't love penguins? As requested by Becca Guttman from NY! 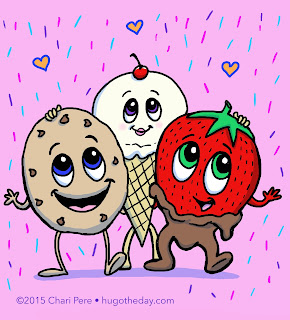 Happy National Dessert Day! Hope this hug adds a little sweetness to your day - but feel free to indulge in your favorite dessert too. =0)
Posted by Chari =0) at 1:30 PM No comments: 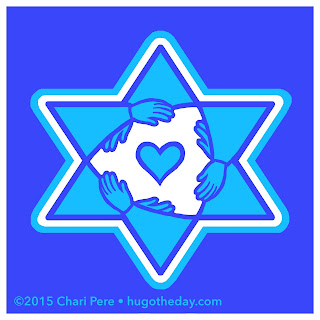 As a Jewish person with many family and friends in Israel, including my sister, it's been absolutely terrifying to read about what's going on there. I drew this last night to post later today, but I'm posting it now because I just got off the phone with her and she heard the ambulances of a terror attack nearby before it was on the news.

Every man, woman, and child is a potential target to be mercilessly attacked for the crime of simply being Jewish and living in Israel. Every day I've been seeing more and more statuses on Facebook of friends who have had "close calls", where either they or their family had just missed being in a spot of an attack. A particularly horrific video that is currently circulating is one where a terrorist drives into a crowd of people at a bus stop, exits the car, and proceeds to butcher a man with a knife. In one of the first attacks, my high school music teacher's cousin and his wife were murdered in a car in front of four of their six children. They were my age. In another attack, a woman and her 2-year-old toddler were stabbed in the same attack that killed her husband and another man. The number of daily attacks is escalating, and the body count is growing.

Words cannot properly express how shaken I am to the core over this wave of terror, so I put my feelings into art. Here is a hug for the entire Jewish community worldwide. We are united, we are strong. When the world is filled with much darkness, we must remember to bring light; to be extra kind, caring, and loving. We must learn to put all our differences aside and to support each other. To everyone in Israel, be aware and be safe. And to my sister, I love you.
Posted by Chari =0) at 7:00 AM No comments: 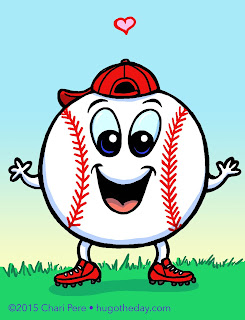 We're back! After about a six-month hiatus (fine, blame the baby), we're back with more hugs! Since we're in the throes of baseball battles, aka The Postseason, I felt it was only appropriate to start back up with a good old fashion hug in honor of America's favorite pastime. To those of you who have teams still in the running, best of luck! For those of you, like me, whose teams are already knocked out (Yankees 2016!), we all know that the Cubs are going to win the World Series anyway.